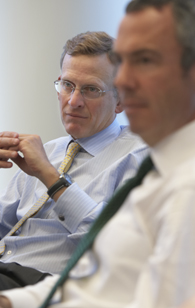 “As independent owners, Edgewood's partners are free to make unbiased decisions. For example, we generate our own investment research, so we are not beholden to outside influences. ”

Edgewood’s Large Cap Growth Equity strategy pursues a bottom-up investment process to construct a portfolio of large-cap growth companies. Edgewood limits its position in any one security to an 8% cap and a 25% limit in any one sector, as defined by Edgewood's Investment Committee.

Edgewood focuses on two distinct areas when managing the portfolio:

The investment team searches for companies that are considered, according to our investment methodology, as well positioned for long-term growth, driven by demand for their products and services, trading at substantial discounts to their fair value, and are at an early stage in their potential profit cycle.

Based on the investment team’s fundamental analysis of a company’s profit cycle and using a five-year discount to present value model, portfolio holdings evolve through three phases:

In Phase Two investments are companies that are considered being increased to a larger weighting due to the relative attractiveness of their valuation in addition to the company moving through the strongest part of its profit cycle;

Lastly, in Phase Three investments are companies that are being reduced because they are nearing the team’s estimate of full valuation or their profit cycle has begun to deteriorate.

We use cookies to make your experience of our website better. We need to ask for your consent to set these cookies. Please note that if you keep browsing this website without electing an option, your consent is deemed to be given.